Journos and other libs have a tendency to treat Democratic politicians less as public servants worthy of public scrutiny than as superheroes, epic celebs, or deities to be worshiped and admired. (See: Barack Obama, 2008 election.)

The media’s obsessive coverage of Vice President-elect Kamala Harris’s shoes, for example, suggests a level of derangement that would not ordinarily be tolerated in a functioning society. Four years ago, of course, it was considered “sexist” to discuss Hillary Clinton’s fashion choices, but there’s no point trying to make sense of it. Journos will be journos. Libs will be libs.

This week, it was failed gubernatorial candidate Stacey Abrams’s turn in the spotlight. She’s been hailed as “a real superhero,” a “GODDESS,” and “one of the most consequential women in US history” for starting a Super PAC funded by Michael Bloomberg.

When it comes to the Democratic politicians who actually won their campaigns for governor, the national political press has been similarly incapable of treating them like elected officials who deserve to be held accountable. Governors, as it turns, are rather important figures in the effort to combat the COVID-19 pandemic, especially in terms of vaccine distribution.

That includes Gov. Gretchen Whitmer (D., Mich.), who was in the running to be Joe Biden’s running mate. How is the vaccine rollout going in her state? Not that great, according to the local journalists who don’t regularly appear on cable news networks.

The GULF between the number of people vaccinated in Michigan and the # of vaccine doses distributed continues to grow.

It’s now 551,101 doses that are NOT in people’s arms.@GovWhitmer needs to explain how this is possible.

CBS correspondent Ed O’Keefe, among others, appears more concerned with Whitmer’s personal Twitter account, and responding to her epic owns of Trump cabinet members with fire emojis. (O’Keefe deleted the tweet after realizing his critics were right.) 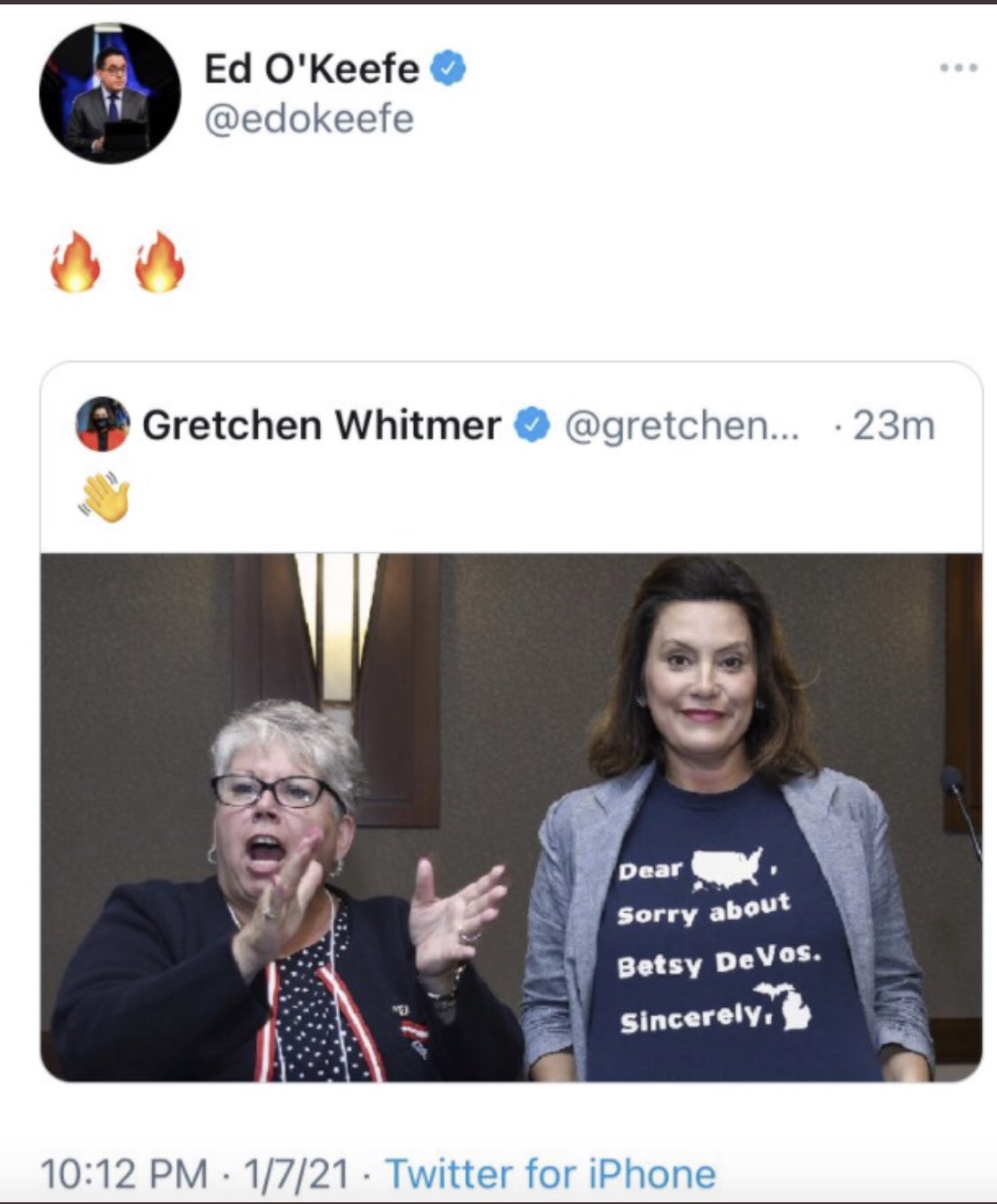 In fairness to the journos, Whitmer’s Twitter feed is pretty epic. Earlier this week, she posted a photo of a Stacey Abrams prayer candle, and engaged in some edgy banter with former SNL cast member Leslie Jones, while giving a shoutout to a novelty account that rates the rooms of people who appear on television.

In other news, ProPublica reported last month that Michigan “continues to lock up children for minor transgressions that aren’t actually crimes,” such as skipping school, refusing to take medication, and disobeying their parents. Not very epic, but harder to distill in fewer than three emojis.

The less said about the media’s treatment of Gov. Andrew Cuomo (D., N.Y.)—a.k.a. “The Butcher of Albany”—the better. If journos were capable of feeling shame, they’d be embarrassed.

Since orchestrating the deaths of hundreds of New York nursing-home residents, Cuomo has been a regular guest on CNN, where he’s been “interviewed” (occasionally with props) by his own brother, Chris Cuomo. He has written a book about his heroic leadership in the pandemic and won an International Emmy Award for holding press conferences.

How is the vaccine distribution going in New York? Not great.

Mayor Bill de Blasio is again begging Gov. Cuomo to allow New York City to start vaccinating seniors. He says the city has 560,000 people over 75. “This will be the category of people who want the vaccine the most.”

@winsjuliet : @NYCMayor just announced on @brianlehrer show that the city of New Rochelle started vaccinating first responders and were fined and their vaccines taken away. @1010WINS

Trump’s presidency was a boon for the journalism industry because it was good for ratings, but also because it motivated journalists to cover politicians the way they deserve to be covered—with scrutiny, skepticism, and disdain. Trump’s absence will motivate them to return to their Obama-era form, but at least the memes will be epic. And the shoes will be

This Week in Campus Insanity Vol. 40

BLM Cofounder: Nuclear Family for Me, Not for Thee