Pro-Biden actress Vanessa Hudgens has come out against drinking water, a stance at odds with that of the administration she helped bring to power through her political activism.

“It’s easy to say ‘drink more water,’ but as someone who thoroughly does not enjoy it, it’s never on the top of my priority list,” Hudgens told Fortune in August. The actress admitted her distaste for water has twice caused her to faint from dehydration.

Hudgens is an outspoken booster of the Biden administration. The High School Musical star was elated following President Joe Biden’s election in November 2020. “Hallelujah,” she shouted in celebration of Biden’s victory, in an Instagram video that was viewed more than five million times.

But the anti-water mantle Hudgens has picked up puts her in conflict with her allies in the Biden administration. Health Secretary Xavier Becerra has categorically endorsed water on behalf of the administration.

“Having access to affordable, clean, and safe drinking water is essential to everybody’s health and well-being,” Becerra said in June.

It wouldn’t be the first time Hudgens has bucked the established Democratic position on health issues. In March 2020, she railed against coronavirus lockdowns, calling them “a bunch of bullshit.”

Locking down until “July sounds like a bunch of bullshit. I’m sorry,” Hudgens said. “It’s a virus, I get it. Like, I respect it. But at the same time, like, even if everybody gets it, like, yeah, people are gonna die, which is terrible but, like, inevitable?”

Vanessa Hudgens' career will be dead after posting this. It's like inevitable. 💀 pic.twitter.com/qYX2DMFjJ2

Despite her tendency to defy Democratic Party doctrine, Hudgens has been a committed activist working to elect Democratic candidates. In October 2020, she traveled to the Democratic stronghold of New York City to convince voters to come out for Biden, holding a sign that read, “Nothing is spookier than not voting.” 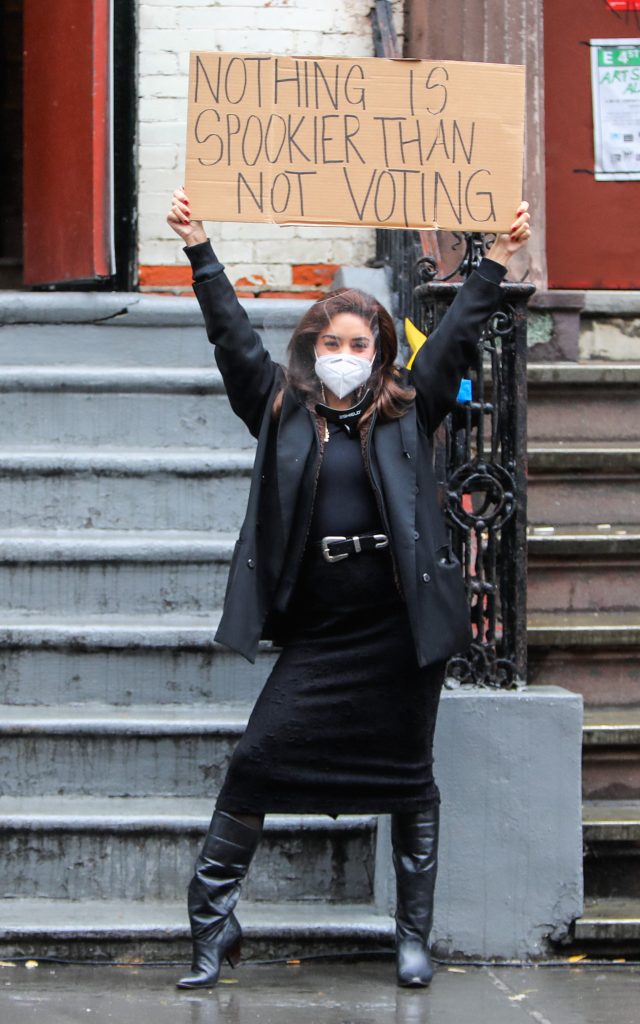 Hudgens celebrated both Biden and Vice President Kamala Harris’s ascension to power following the 2020 elections. But her efforts to promote Democratic presidential candidate Hillary Clinton in 2016 were less successful.

Hudgens’s dislike for water inspired her to back multimillion-dollar cactus fruit beverage brand Caliwater. She said she became obsessed with the fruit after drinking cactus margaritas in Mexico.

“To have a drink that’s super hydrating, full of electrolytes, and can give me everything I would need out of water is amazing,” Hudgens said of cactus water.

The actress joins a number of other Biden-aligned celebrities who shun water. Pro-Biden model Gigi Hadid, whose billionaire father Mohamed Hadid and model brother Anwar Hadid are best known for their anti-Semitic commentary, has said she’s “the worst at drinking water.” And actress Zendaya, who urged fans to “vote this mf [Trump] out,” told Harper’s Bazaar she “hate[s] water.”

They Insist Everything Will Be Fine As We Face Shortages Of…