Like most Americans, I was absolutely horrified by the violence that I witnessed at the U.S. Capitol on Wednesday.  I didn’t understand how protesters could have possibly gotten inside the U.S. Capitol, and I didn’t understand why police were slow to respond to what was happening.  In the hours following the attack on the Capitol, lots of reports were going back and forth on social media.  Some of the information was good, and some of the information was not.  I have updated this article to reflect the latest information that we have received.  The following are some questions about the chaos at the Capitol that desperately need to be answered…

#1 How Did Protesters Get Near The Capitol In The First Place?

Well, it turns out that police actually opened up the barricades that were surrounding the U.S. Capitol and purposely allowed protesters to storm the building.  You can see this on video right here…

Police opened gates and offered them in

And once the barricades were open, at least one police officer was actually waving protesters onward…

#2 Who Was Breaking The Doors And Windows At The Capitol?

The general consensus in the media is that it was Trump supporters that did this, but in this video you can see Trump supporters actually trying to pull Antifa activists away as they were smashing the glass…

President @realDonaldTrump supporters pulling Antifa terrorists away from building. There’s plenty of these videos. Why isn’t the #mainstreammedia reporting? pic.twitter.com/ItzN2YWETL

You can hear the crowd booing and demanding this person stop breaking the window at the Capitol in this video pic.twitter.com/Ue1DEx0qIA

#3 Once Protesters Got Inside The Building, Why Did A Guard Lead Them Up Several Flights Of Stairs?

To me, this video footage is absolutely jaw dropping…

Psyop. Look at the photographers while going up the stairs and at the end. The officer is leading them where to go and gives the guy a little nudge and says “they’re here” when at the 2nd floor and officers just walk up and say “leave”. Paid crisis actors to look like agitators pic.twitter.com/U3BJ4REtpz

Either the U.S. Congress has the worst security personnel that any of us have ever seen, or this was allowed to happen on purpose.

#4 Who Arranged For Antifa Buses To Be Brought Into The Heart Of D.C. With An Escort?

There have been multiple reports that Antifa activists were brought into D.C. by bus.  In fact, one patriot actually recorded video of four Antifa buses that were brought right into the heart of Washington D.C. with an escort…

Pantifa was bussed in. pic.twitter.com/lRL9vKYlRe

#5 Were Trump Supporters Responsible For Some Of The Vandalism Inside The Capitol?

Yes, sadly there were some Trump supporters that committed crimes inside the U.S. Capitol.

For example, the man that stole a lectern from the Capitol has been identified as a Trump supporter from Florida named Adam Johnson… 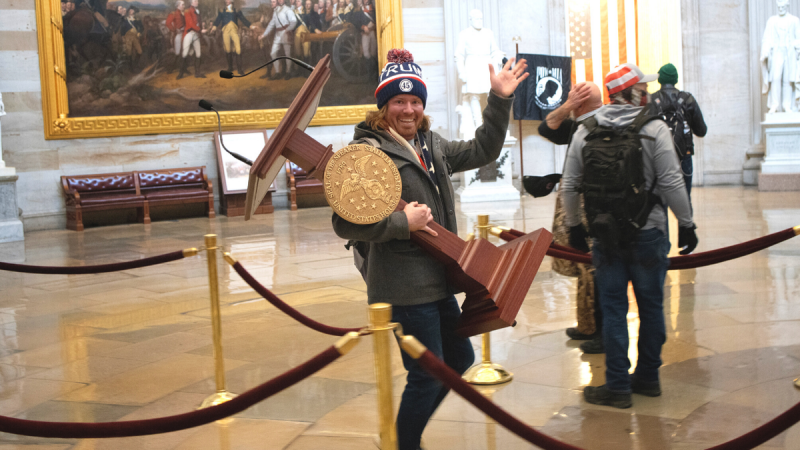 And there were many others that got caught up in the violence as well.

#6 Were Radical Leftists Identified Among The Protesters Inside The U.S. Capitol?

Utah resident John Sullivan, the founder of a violent far-left organization known as “Insurgence USA”, was photographed inside the Capitol…

This is BLM activist John Sullivan yesterday…. Definitely Not a Trump supporter.
You won’t hear or see this in MSM pic.twitter.com/TyfReHd0hf

He was later interviewed by CNN, but they never asked him what he was doing there…

John Sullivan is on CNN. Talk about a disgusting representation of Utah tonight. pic.twitter.com/NkgxxdTDaO

Over the coming weeks, we will learn much more as law enforcement authorities conduct their investigations.

But it is interesting to note that Congressman Mo Brooks is admitting that he was warned of a potential Antifa attack on the Capitol in advance.  The following is what he posted on Twitter earlier today…

Please, don’t be like #FakeNewsMedia, don’t rush to judgment on assault on Capitol. Wait for investigation. All may not be (and likely is not) what appears. Evidence growing that fascist ANTIFA orchestrated Capitol attack with clever mob control tactics.

1. A Congressman warned me on MONDAY of a growing ANTIFA threat & advised that I sleep in my office rather than leaving Capitol complex & sleeping in my condo. I heeded that advice & have slept on office floor for 4 straight nights.

2. Congressman told me he was warned on TUESDAY by Capitol Police officer that intelligence suggested fascist ANTIFA was going to try to infiltrate the Trump rally by dressing like Trump supporters.

3. Capitol Police advised TUESDAY that it best not to leave Capitol complex.

4. Evidence, much public, surfacing that many Capitol assaulters were fascist ANTIFAs, not Trump supporters.

All of this just seems very odd to me.

Just as a debate about the evidence of election irregularities was about to begin in the halls of Congress, riots conveniently broke out directly in front of the U.S. Capitol.

Members of Congress were quickly evacuated, and the millions of Americans that were watching never got to see an honest debate about the 2020 election.

When proceedings finally resumed, the entire atmosphere had completely changed, and all of a sudden hardly anyone was interested in debating whether the election results were legitimate or not.

So who actually benefitted from the riots?

I think that question is the key to this whole thing.

Also, it is important to note that these riots have dealt a severe blow to any political future that President Trump hoped to have.

So with one stone, activists have neutered the debate over the legitimacy of the election and they have devastated the Trump movement as well.

It appears that someone really was playing “3D chess”, and it wasn’t Trump and his supporters.

And this is just the beginning.  As I keep warning, the radical left will never be satisfied until they accomplish all of their goals.

Electing Joe Biden was just a way to get rid of Trump.  The radical left actually doesn’t like Biden either, and they will fight him bitterly if Biden does not go along with their full agenda.

In the end, what they want is a full-blown “revolution” in this country.  And as we witnessed on Wednesday, they will go to extreme lengths in order to get what they want.

***Michael’s new book entitled “Lost Prophecies Of The Future Of America” is now available in paperback and for the Kindle on Amazon.***

About the Author: My name is Michael Snyder and my brand new book entitled “Lost Prophecies Of The Future Of America” is now available on Amazon.com.  In addition to my new book, I have written four others that are available on Amazon.com including The Beginning Of The End, Get Prepared Now, and Living A Life That Really Matters. (#CommissionsEarned)  By purchasing the books you help to support the work that my wife and I are doing, and by giving it to others you help to multiply the impact that we are having on people all over the globe.  I have published thousands of articles on The Economic Collapse Blog, End Of The American Dream and The Most Important News, and the articles that I publish on those sites are republished on dozens of other prominent websites all over the globe.  I always freely and happily allow others to republish my articles on their own websites, but I also ask that they include this “About the Author” section with each article.  The material contained in this article is for general information purposes only, and readers should consult licensed professionals before making any legal, business, financial or health decisions.  I encourage you to follow me on social media on Facebook, Twitter and Parler, and any way that you can share these articles with others is a great help.  During these very challenging times, people will need hope more than ever before, and it is our goal to share the gospel of Jesus Christ with as many people as we possibly can.

The post -UPDATED- Questions About The Chaos At The Capitol That Desperately Need To Be Answered first appeared on End Of The American Dream.

They Are Doing It Again, And We Have Seen It Happen Way Too Many Times Before…

False flag at the Capitol: it’s all about the effects and after-shocks

The Great Debate About America’s Future

The Only Solution To America’s Problems Is Jesus

They Are Doing It Again, And We Have Seen It Happen Way Too Many Times Before…

Over The Past Week, 5 Republican Lawmakers Have Suddenly Died

When We Teach Our Kids That Life Has No Value, This Is How They Act…