WWII veteran searches years for little girl who wrote him thank-you letter, gets the ‘miracle’ he was wishing for: ‘This is a godsend’

World War II veteran Frank Grasberger received a “thank you” letter from a young girl 12 years ago, which touched his heart so much that he has been thinking of the little girl ever since. The WWII veteran finally got to meet the little girl, who is all grown up now, and it was a heart-melting reunion.

When Dashauna Priest was 9 years old, she wrote a letter to Grasberger thanking him for his service in World War II, where he fought in the Battle of the Bulge. Dashauna wrote the letter to Frank because she admired people in uniform.

“If it wasn’t for you we would never have freedom. … I’m so happy you made sacrifices,” the letter reads. “Your friend, Dashauna Priest.” 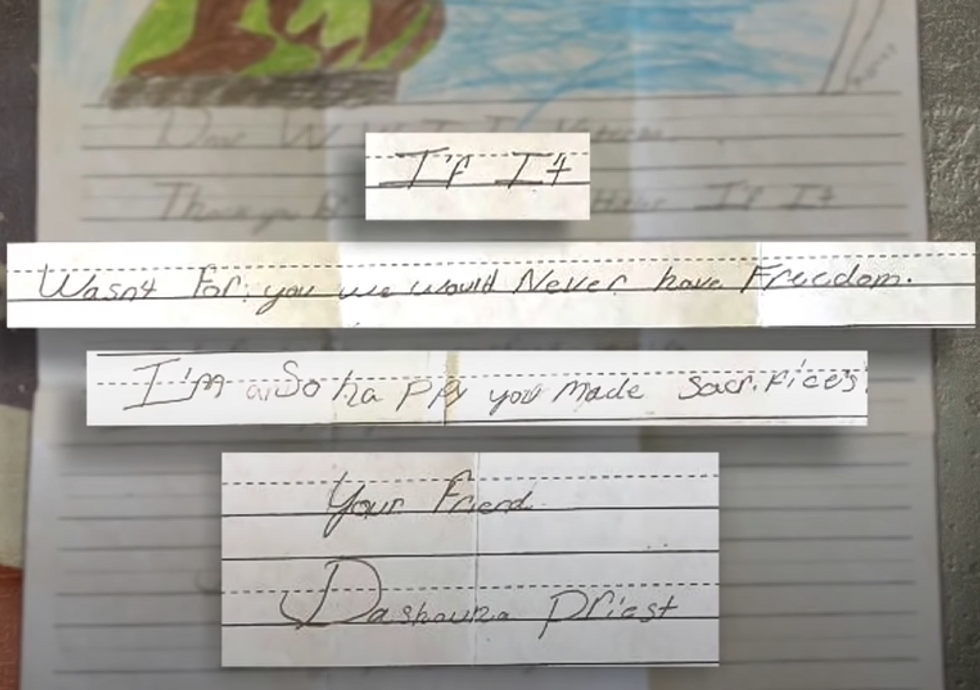 Priest’s letter gave Grasberger life, and he carried it around with him wherever he went. “I’d never be without it,” he said. “Because it’s something that somebody thought of me that much.”

His wife, Delores, explained, “When he has that letter with him, he has a feeling of faith, and trust, and love.”

Delores contacted Priest’s school and sent her a card, thanking her for the special letter.

Grasberger attempted to track down the little girl who wrote the special note to him, but never was able to find her.

Jill Pawloski, the services director at the Vitalia Senior Residences in Strongsville, Ohio, heard about Frank’s story and how much the letter meant to him. She began using social media to try to track down Priest.

The heartwarming meeting of two strangers, who bonded through a 12-year-old letter, finally happened in July.

Priest, who is now 21 years old, met the WWII veteran she had thanked so many years earlier.

Frank melted when he finally got to meet Dashauna. “Don’t make me cry, please. Honest to God. Oh, I love you so much. I really do.”

“You don’t know how long … I pray every night with this thing, I really do,” Frank told Dashauna. “This is a godsend, it really is.”

To make the meeting even more extraordinary, Priest surprised Frank by wearing her Army National Guard reserve uniform to the teary-eyed meeting. She is serving in the military as Frank once did.

“You can’t imagine the feeling I had when she stood next to me. It just took my breath away, it really did,” Grasberger told CBS News.

Delores joked about her 95-year-old husband, who survived three heart attacks, “I thought, ‘Where’s his heart pills?’ Because I thought, ‘This is it! This is the big one!'”

“There’s love there, deep down in the heart. She’s like my third daughter, she really is,” Frank said of Dashauna.

“It started with a lot of love and affection,” Delores added. “And it’s ending the same way.”

“And now I met the girl that signed me the letter … and that is a real miracle,” Frank said. “That really is.”


A thank-you to a veteran

Labor Day: Real Wages Are Falling in the Biden Economy

Joe Rogan believes Trump will run in 2024 and probably win: ‘How is Joe Biden…

Chen Feng and Tan XiangDong had been arrested but HNA’s…

REWIND: CNN Wouldn’t Admit, or Even Check If…